Well, we finally have internet in the apartment. Thank goodness for data plans and smart phones that allow you to take care of the essentials until your internet gets hooked up.

We're in Maine!  I think it has rained everyday so far.  My dear Watson went through his first week of orientation and now the real thing starts up on Monday.  Apparently  this summer semester is the very hardest.  The advice previous students gave spouses was to pay attention and make sure their spouse takes a break from studying every now and then. Apparently there is enough stuff to learn that you could study 24/7 and still not be fully prepared for the test.

My mom left today. She was amazing. She unpacked my ENTIRE house. It would have taken me months to do it.  I was in charge of unpacking my bedroom and by Thursday mom finally came in and did it because I was making no progress :). But hey, I feed my baby a bagillion times a day and change his diapers too, so....I do stuff.

We've already met some great people - neighbors, ward members, class mates etc.  I think we'll like it here. We are both trying to figure out how we are going to do everything. How do we take care of ourselves, our family, and all the day-to-day essentials?  I'm not really sure yet, but I guess we'll give it a go and find out soon.  If you remember, please keep us in your prayers. The truth is, we're going to need all the help we can get. I think we're scared to death.

I'm feeling great physically. Still a little rocky emotionally though.  Hormones. New baby. Big move.  I'm not sure what to blame it on, but I'm a little sensitive.  Our biggest scare right now is that we're not sure what to do for medical coverage for Redd and me.  We will apply for Medicaid but it could take up to 6 weeks for them just to review the application....so, not sure what to do in the meantime. Hopefully we get that figured out.

Redd is adorable. According to my scale, he weighs 8 lbs.  He's a little gassy so that means fussy at times, but really he isn't bad.  He eats and then sleeps or sometimes he likes to be awake looking around, but I don't have to always hold him in order for him to be happy.  He doesn't like to be cold, so baths, lotion, diaper changes and clothes changes are all really frustrating to him. He does that cry where he doesn't breath for a few seconds almost every time he gets his diaper changed. I don't like that very much.

We made it through all this crazy stuff and now we just have to endure the challenges ahead.  It seems like everything has worked out so far, so we should expect things to work out from now on as well.  Before we know it, this will all just be routine. 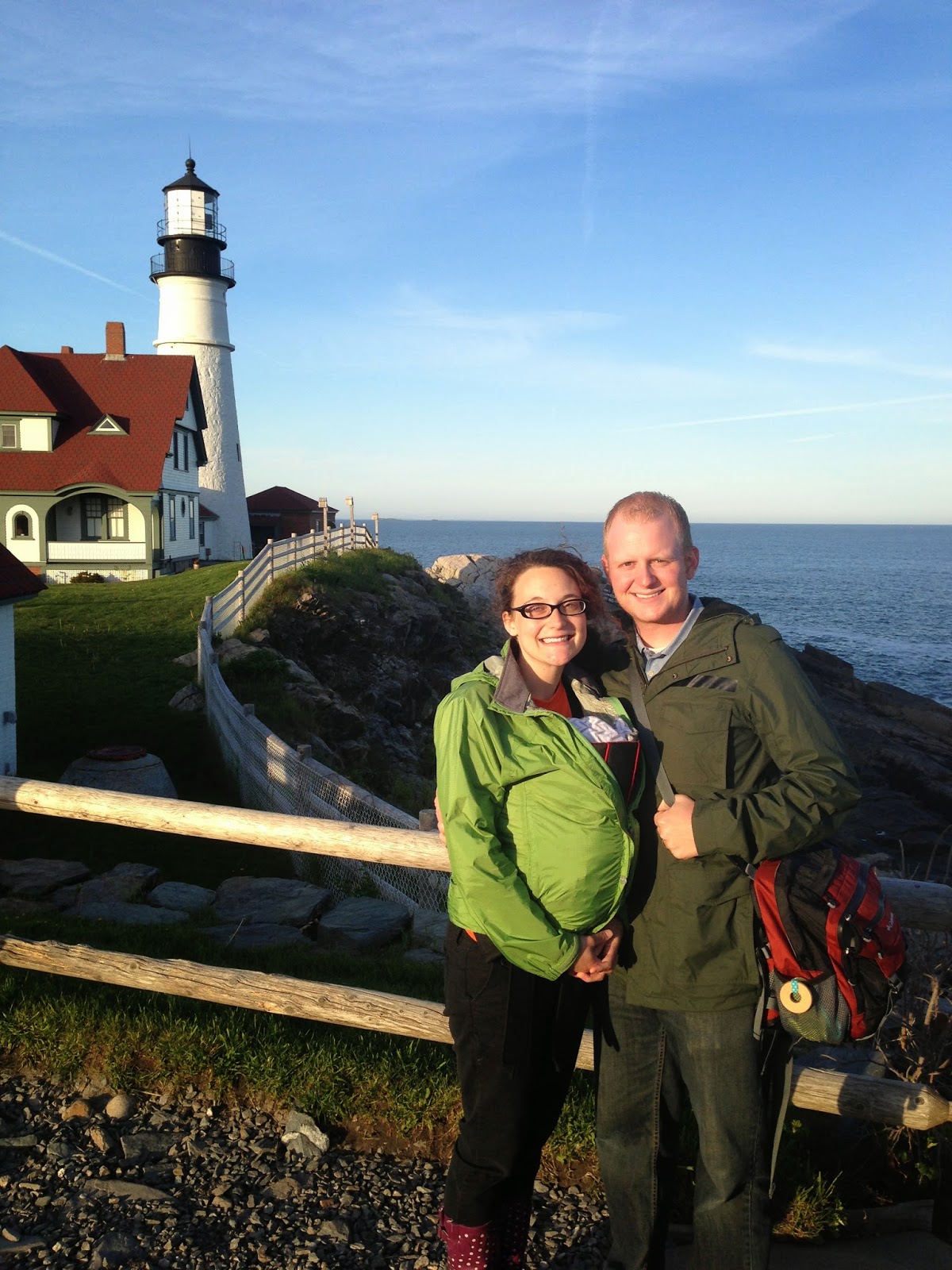 Remember those commercials? They were for 10-10-2-20 or something like that.  Anyway, here's the story.

Tuesday, May 6th I had a Dr. appointment and he tells me there's no chance of being induced before a week late. Not that I really wanted to be induced, but given our tight time frame, I wanted to be induced.. So that was disappointing (although I know the Dr. has that rule to help prevent C-section and other complications).

Wednesday morning I notice some spotting. I called the Dr. and they said just watch it - if it's a lot of blood, that's bad, otherwise it's normal.

Thursday I was still bleeding so I called again and this time they sent me to Labor& Delivery for an assessment.  All seemed to be fine and they expected I would go into labor soon.

So we came home and went on a hike, did squats, etc.

Friday I was real frustrated.  I wasn't feeling great and all I wanted to do was focus on getting the baby here. So I stayed home from work and we loaded up our stuff from the Watson's and took it to my moms.  Then we walked around the aquarium,  then later we walked/ran/squatted around the track.

I still wasn't feeling any progress.  So that night I made a treat.  Then around 8:00 pm  I started noticing a stronger contraction coming about every 5-10 minutes.  I kept expecting them to get closer together, but they stayed that far apart, but did get stronger. At about 12:30 I called my mom and asked her when I should go in. She said to go and then call her after they check me out.  The contractions were strong enough now that I had to stop whatever I was doing when one came on.

We got in the car and my dear Watson sped to the hospital like the baby was about to pop out.  I told him he probably didn't need to go so fast, but he said it was the only time he could speed and not feel guilty....so, whatever.

We got to the hospital and I was dilated 1 cm more than when I was at Labor & Delivery the day before....so that was  disappointing.  They kept me there for an hour to see if I made any progress.  After an hour I was dilated a tiny bit more, but effaced now at 100%.  So they called it labor and I called mom and decided I would get the epidural.  I was nervous about it, but it was no big deal. It made labor so easy.  I took a nap and before I knew it I was at a 6.5.  Somewhere around that time the nurse thought baby's heart rate was way too slow....that was a scary moment. So they broke my water and put a lead on the baby's head. His heart rate was fine. She was picking up my heart rate mixed with his on the external fetal heart rate monitor.  The lead on his head was much more accurate.

By 8:30 am the doctor was here and I was complete (at a 10). We were ready to start pushing. They didn't think it would take much because the baby was already down pretty far.

Everyone who came in and out kept saying "oh, that was so close" "it's like he pops out and then pops back in" "keep going" "harder" "push down".

I was so tired of everyone - I just wanted that baby out.  Pushing was nothing like I expected and was by far the worst part for me.  By this time I had very little epidural in my left side so I was feeling concentrated pain on that side of my body.  I was getting a charlie horse type cramp on the left side of my rear end, and they made me wear an oxygen mask because baby's heart rate dropped when I held my breath and pushed for 10 seconds. Imagine that.  The blood pressure cuff kept going off right during pushing and I wanted to rip it off my arm.

Finally the Dr. said he was going to do a small episiotomy and he felt that would be the trick to get the baby out.  I think it was the next push, maybe two pushes later that he came out.  Alien head and pointy nose, and pretty much perfect.  I got to hold him right away (thanks to my great nurse who made sure that happened).  I wasn't feeling very good at this point, so they took him away and did their stuff.

The Dr. stayed down there forever....I heard him talking to the resident who was there about lacerations and it seemed like he was stitching me up.  I didn't think it should be taking that long.  Then I learned I had torn pretty bad and he was doing a complicated stitching-up job. He pretty much said it looked like a bomb went off down there.  After he was finished he ordered a little more epidural and boy was I glad. I started to really feel the burn.  I also almost passed out and then got the shakes.  So they took my dear Watson and the  baby to the nursery without me and I rested in Labor & Delivery.

He was small for his gestational age so they had to check his blood sugar every 6 hours for the first 24 hours.  He passed all those tests just fine.  I was really feeling good after the first day so we decided to go home.  They wheeled me down and waited for my dear Watson to go get the car. They watched us load the baby up and then let two 25 year olds ,who had no idea what they were doing, drive off with a newborn baby and no instruction manual.  I still can't believe it.

He smiles a lot in his sleep though, and it makes me think we're doing alright. 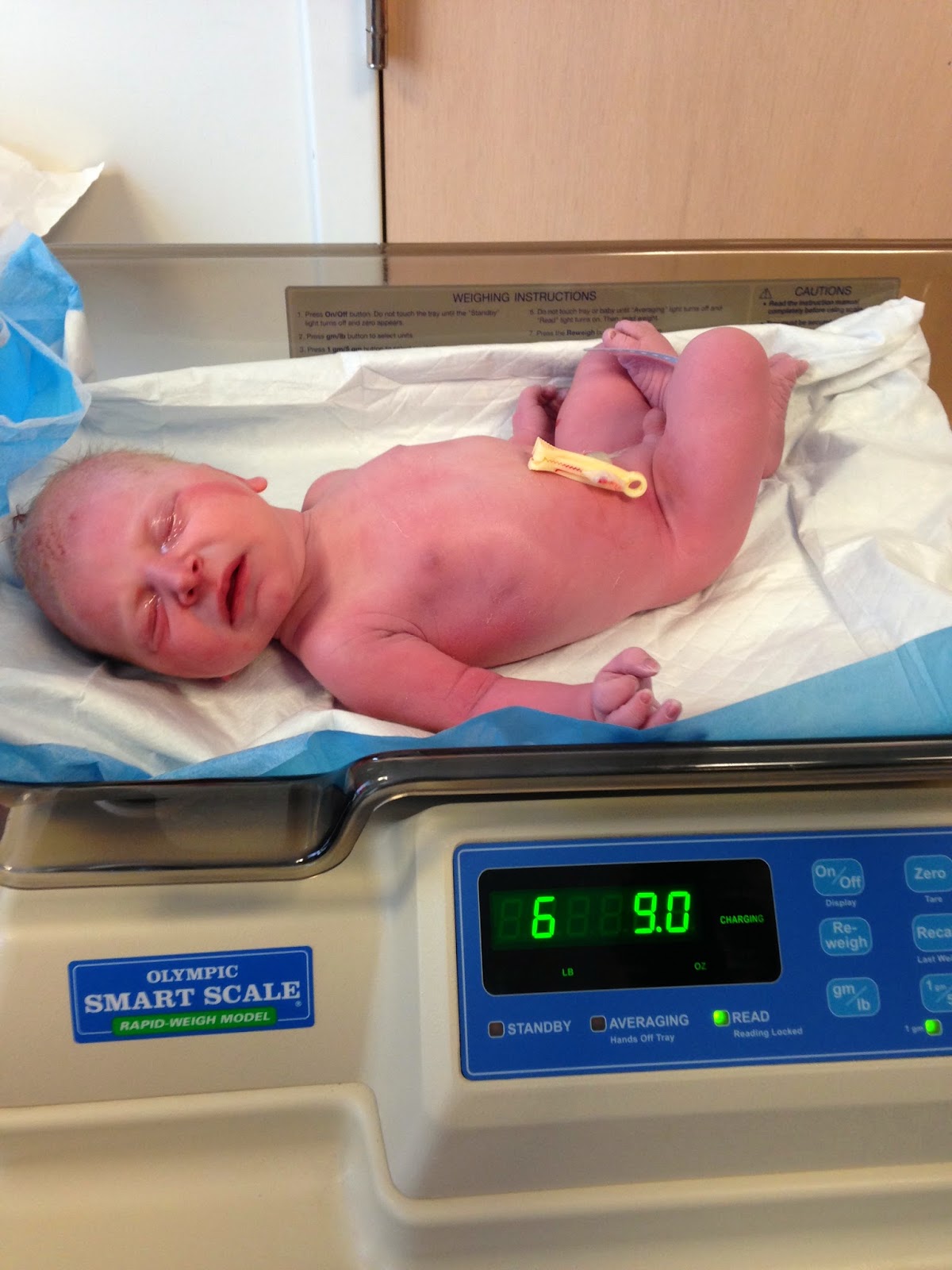 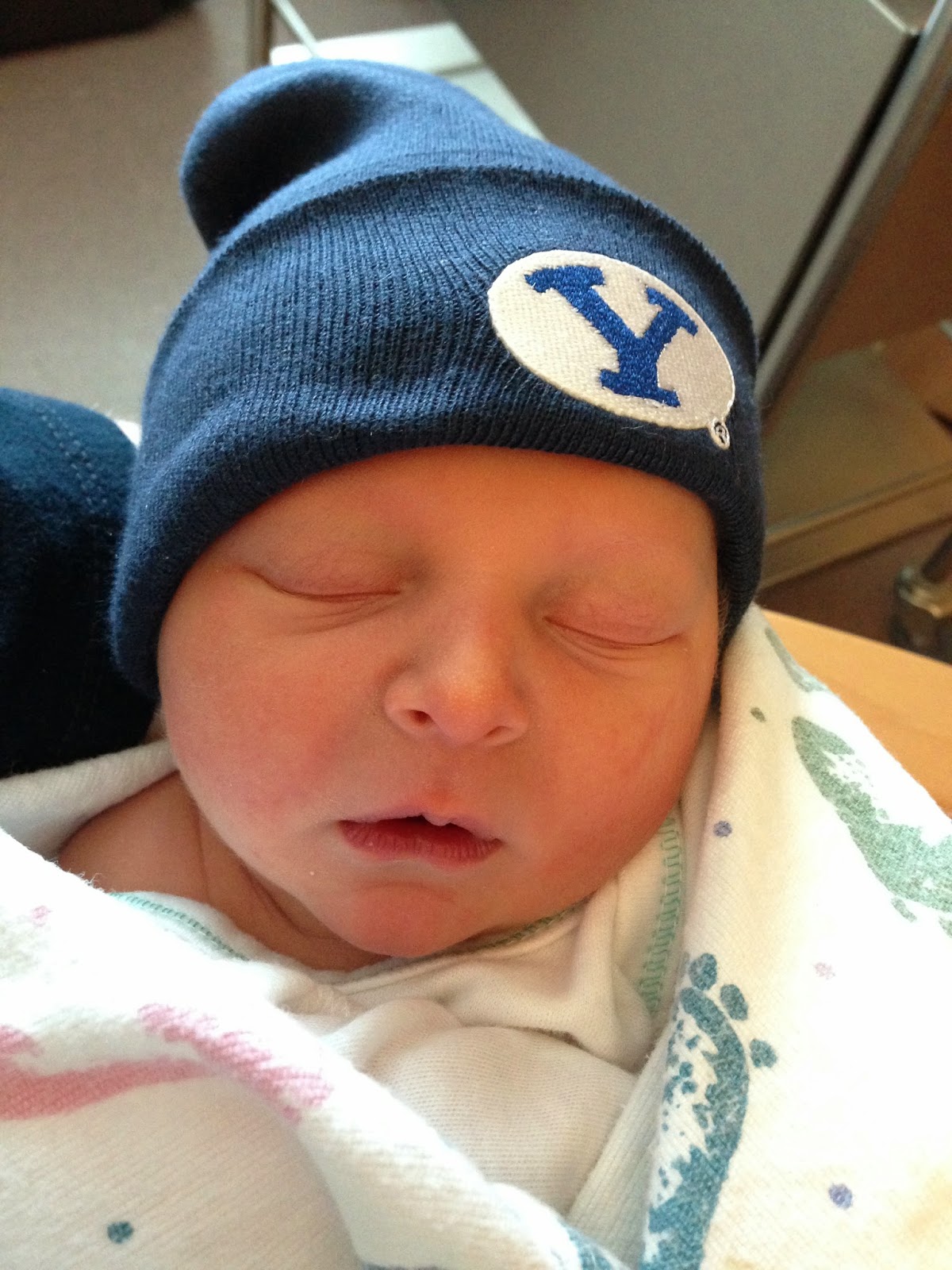