I just read something that said Black Friday is going to have the most, and best deals it has had since 2008.  *YAY*.  I don’t like shopping-- mostly because it takes too long and everything is too expensive and I don’t like the massive crowds of inconsiderate people (especially at WalMart).  BUT, I do love a good deal (and a good tradition), so I look forward to the chaos of Black Friday with hope that I’ll find something cheap enough to actually spend my money on. I’m in the market for some new boots (I’m hoping for a 2 pair deal), and a TV. We’ve been saving up so my dear Watson’s dream of owning his own big TV can finally come true. Although, we rarely get a single channel we can watch due to bad antenna reception. I kind of think a bigger TV is only going to make that more depressing. I’ll also be shopping for Christmas presents for friends and family—it’s always easier to buy things for other people than for myself.
I ended up with 5 pumpkins! I think pumpkins are the best way to celebrate fall.  Here’s me, like a little girl at the pumpkin house on 1600 North. 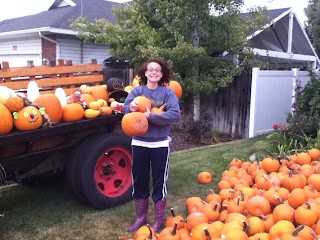 I’ve always wanted to buy pumpkins from that nice old man, and now that the city is trying to shut him down, I figured this year was a great time to give him my business. I was in heaven. We spent $5 and got 3 babies and a toddler sized.  Then our nice landlord gave us a big one from his garden. 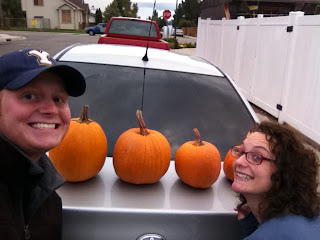 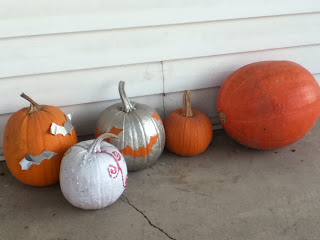 My dear Watson had a birthday on Tuesday. Poor guy had to spend almost the whole day and night at school.  I wanted to surprise him by decorating our front door before he woke up in the morning.  I was so excited as I placed the last balloon on the door that he didn’t wake up! I actually, finally, was going to really surprise him.  I took a step back to admire my work, and saw two giant eyes staring at me from the little window on the door.  I screamed like I was being mugged and then we had a good laugh. So, I didn’t surprise him after all—but he sure surprised me.  I got him a few lame presents (because I bought him an Ipod Touch this year which kind of counted as a lot of presents) and I called him a lot to say happy birthday.  He had a root beer float (thanks Hannah and Kendall!) at the end of the night to top it all off. 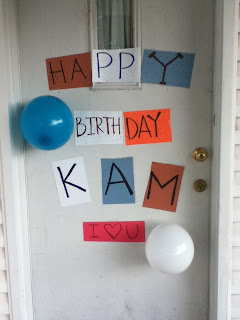 Posted by Abby Watson at 8:48 AM No comments:

My dear Watson and I needed some potatoes for our Pumpkin Soup dinner yesterday, so we stopped at the BYU farmers market to get a bag of delicious Idaho potatoes.  While we were taste-testing spicy pepper jelly on a Ritz cracker with cream cheese, we heard what sounded like a rear-ending car crash.  It didn’t take long to realize it was a rear ending, but it wasn’t two cars; it was a bicyclist who rear ended the car.   My dear Watson rushed up there and started telling people to get paper towels or napkins. One of the people who ran up to help was a CNA so she took over dressing his wounds.
The biker was changing lanes from the bike lane towards the left, as if he was going to turn left at the light just ahead.  There were 2 lanes of traffic so he was probably looking to the left to make sure he was clear in the second lane, and misjudged the car that was stopped in front of him at the red light.  His head hit the back windshield and shattered it.  He had deep, deep cut about ½ inch below his eye and the CNA was pulling glass out of it and trying to apply pressure to stop the bleeding.  He also had a cut on his arm.  My dear Watson was talking to him and the man kept asking what city he was in, what happened etc.  At one point he said something like “I never crash.” A random lady was claiming she does “energy healings” and it was like she was doing the actions to Popcorn Popping right in his face—over and over. It was WEIRD.
He was laying in the middle of the lane, so some of the bystanders were directing traffic around him. It took the paramedics forever to get there because it was right during rush hour traffic around Provo.  Eventually we saw a woman riding up on her bike and it turned out to be his wife. They were biking together and she got far enough ahead that she didn’t know what had happened. She turned around when she noticed he wasn’t behind her.  She seemed a bit shocked.
It couldn’t have happened at a better time, really.  There were a lot of people close by at the farmers market who were just ready to help right away.  When they needed ice and paper towels we communicated that back to the Farmer’s Market booths and voila! we had ice and paper towels.  I think he’s going to be okay. He was wearing a helmet and biking sunglasses, which is probably what protected his head and eyes.
My dear Watson got some blood on his new jeans, but for a noble cause (and it washed out well).
I stood there watching as a grown man lay helpless on the road, and random strangers got blood on their clothes to help relieve his pain and suffering.  It was a humbling experience as I considered if it had been me, how grateful I would be to those people for helping me. It was quite the adrenaline rush.
Posted by Abby Watson at 9:44 AM 3 comments:

A Cake and Some Bibs

Well, my cake turned out to be beautiful AND delicious!  It's white cake with a vanilla cream mousse filling and with homemade caramel poured over the top layer. Buttercream frosting on the outside with purple swirls. My dear Watson said it looked like an 80's wedding cake. 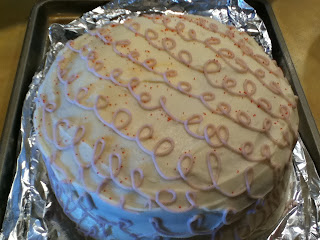 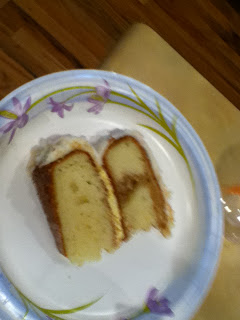 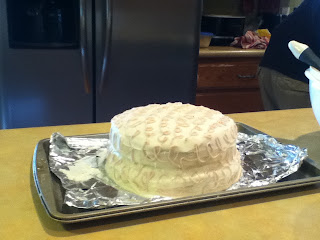 I've also been doing a little bit of sewing lately.  I made these bibs for my SIL who just had a baby on Saturday. 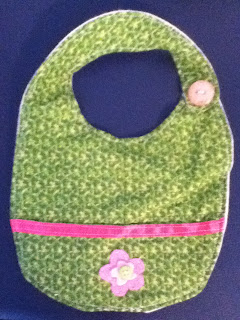 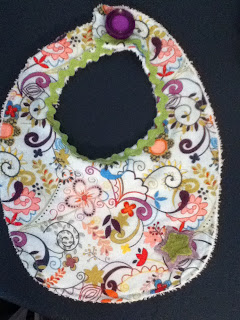