We are very busy these days. To make it worse we were both sick last week and now my dear Watson is sick again.
My dear Watson decided to major in Exercise Science. I'm really excited about that. I had been hoping all along that ES would be his choice.  I think he will really like it and he'll be so good at it.  He's not sure yet the exact direction he wants to go, but we'll figure that one out a little later.
I got a temporary calling from the Stake Presidency to be a Stake Girls Camp Specialist. It should be a really fun,  busy calling. Girls camp is the first full week in July and they go to a place in the mountains nearby called Camp Shalom. I went there when I was a Young Woman every year for girls camp.  I never loved girls camp, but I'm already feeling like I'll have a much better experience as a leader.
We decorated some Easter eggs with our nephews and we hid each other's Easter baskets around the house to celebrate. We also attempted to give a really great lesson about the Resurrection in primary, but our 3 year old Sunbeam's must have eaten way too much candy because they were definitely NOT interested.
I'm ready for a vacation. Hey! We've got one planned a week from Tuesday. Washington D.C./Maryland: HERE WE COME!

I had a strange dream last night.
I was with my mom, dad and little bro in Pocatello, ID visiting my sister Hannah and her family (who actually live in Logan, not Pocatello). For some reason I was driving back early with my little bro in our Toyota Corolla. I came to a fork in the road and realized I forgot to ask mom and dad how to get home.  There were two signs at the fork telling where each road led. I drove past the sign and couldn’t see it good enough so I just backed up on the freeway so I could get a better look.  Provo: Left.   So I turned left, only to find another fork in the road about 100 feet ahead.  This one said Ohio on the right and something else on the left. I didn’t know what to do so in a panic, I took the road on the right (thinking maybe Ohio was the final destination and Provo was somewhere along the way).  It was dark and snowy and I was having a hard time seeing the road. There was a lot of construction that completely altered the normal road-path.  Finally I got into a situation where I could NOT see whether the road curved or went straight or anything, and I couldn’t see the cars in front of me to just follow them.  I let go of the wheel and drifted in to the middle of the road and hoped I wasn’t in the way of oncoming traffic. I heard semi’s honking their horns, but I didn’t get hit.
I was anxious to find out the end of the dream, but then I woke up.
I’ve been thinking about this ALL day long and what it might mean. My dear Watson and I are kind of, well, directionless right now. My dear Watson is trying to decide on a major and possible career path and it's a slow process. We’re not sure which way to go or what our future will hold. Sometimes I feel like I’ve had enough; I can’t possibly keep my foot on the gas pedal any longer because I CAN’T SEE what’s ahead. That’s all. I’m just frustrated I can’t see what lies ahead for us. I really believe it’s something great, but I’m impatient to know the answers.
Like I said, I wish I could have seen the end of the dream to know if I was able to gather myself and keep going and eventually find my destination.  But I guess maybe the lesson in this is I need to press forward even though I can’t see—because that’s  the very definition of faith and hope. We had a family night lesson on hope and the thought came to me that faith is knowing the Lord can do something—knowing he has the power to answer prayers, make miracles happen etc..; hope is believing and having an abiding trust that He WILL do those things we ask of Him.  How many blessings have I missed out on because I didn’t have enough hope that if I asked for it, Heavenly Father would really give it to me?
Just some thoughts.  On another note: I got a sewing machine! Isn’t she a beauty?
Posted by Abby Watson at 7:47 PM 4 comments:

Everyone's a Fool in April

Some of the fam came into town to hear dad speak last week. Betsy and Russ stuck around for a whole week! It was really fun, because of course, they are really fun. Everyone knows it…and so do they.

This is their little girl, Afton. She is so cute I couldn’t stand it. 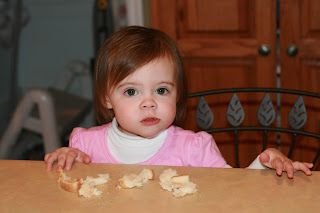 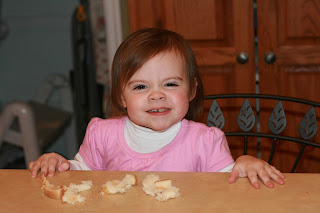 Everything she said or did just made me want to keep her forever. She is 2 and although her vocabulary is small, she can repeat anything and give you a clear understanding of what she wants or doesn’t want.  A dorable. One night while Betsy and Russ were here, we followed my 16 year old brother around until he parked our mom’s Mazda Tribute at a friend’s house. Then we turned the car on as far as it would go with the spare key mom hides on the outside, put it into neutral, and I steered while my dear Watson and Russ pushed. I thought we were going to die when they pushed me into the road and a car was coming. Don’t worry though, I honked my horn several times to make sure they saw us J.

We pushed the car to a neighboring cul-de-sac and went back home to wait. Maybe 20 minutes-ish later, little bro comes home and says (as worried as we’ve EVER seen him), “Um, I’m pretty sure someone stole the car.”  We played around with him for a while and told him we should probably call the cops, but the call should come from the place the car was last seen. Mom and dad were in Vegas with Donny & Marie so we couldn’t call them at the moment—and that made little bro very happy. My brother-in-law took little bro back to his friend’s house so they could call the cops.  When given the direction to turn at the cul-de-sac “up here”, Russ turned the opposite direction “on accident” and they drove right passed the car. It took little bro a minute to catch his breath and settle in to the fact that the car was NOT stolen, just moved, and by us.  He was relieved—to say the least—and we all had a grand ole’ time.

For April Fool's day I put honey on the doorknob, saranwrap on the shower head and candy in my dear Watson's medicine bottle. He fell for the honey, saw the saranwrap and I had to show him the medicine bottle because he forgot to take his medicine. It was a fun day. This is a picture of my second cousin and I waiting to say the prayers when my dad spoke at devotional! 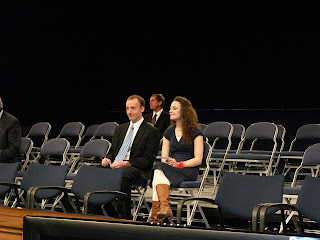