I ran a 1/2 marathon on Saturday. It was at Thanksgiving Point and it was much, much harder than I expected. They advertised it as being a beautiful run through their tulip gardens, right at the peak of tulip season. Unfortunately, when I woke up there was 3 or 4 inches of snow on the ground. Hannah (my sister who also ran the race) and I had to shovel snow off my car in order to drive to our race. Yuck.  It turns out I think I saw like 4 patches of tulips and they were covered with snow. My romantic vision of tulips completely engulfing me as I ran on the cobblestone walkway was a bit grandiose. Oh well, the few tulips I saw were beautiful. I've never walked through those tulip gardens but I learned that there are some p-r-e-t-t-y steep hills all along the gardens, and don't get me started about the golf course. Hill after hill after hill after hill after hill (are you wondering when this is going to stop? So was I) after hill after hill after hill after hill..... It was 8 or 9 miles of hills up and down. Not just little baby hills, GIANT hills--I felt like I should have brought rock climbing gear so I could get up and down safely.

I enjoy going up hill when I run because I like the challenge. It feels so good to reach the top.  After hill 20 the 'feels good' feeling was gone and I was just trying to see the end.  Luckily the race went pretty fast because I was just focused on getting to the part where the hills end, that before I knew it I had run 12 miles.  I tried to push myself up and down the hills (hoping again, that at some point it would end) so by the time I was finished with the race I was VERY tired and sore. Day after the race I felt sore in my calves, hamstrings and quads, but not as much as I expected.  I finished in 1:57:31 which turned out to be 7th out of 65 in my age group and something like 238 overall (out of 912).  Hannah finished much faster than expected as well considering she is a mom of 4 boys with a husband who works full time and is getting an MBA on the weekends. She didn't have as much opportunity to train but she ended up doing really well, especially considering how rigorous those hills were.

It was fun though, and that is why I love running. It was really cool to have my dear Watson there at the finish line waiting for me. This was the first race he has seen me run, and it was really cool to have him feel so proud of me for what I accomplished.  So, I've added another medal to my collection of race medals (you know, the ones they give everyone just for finishing) and my single trophy (that I actually won for placing 2nd in my age group). I hope to continue to add to my medal collection throughout my life.

Here are some very beautiful pictures of me and my double chin. I don't usually have a double chin but I guess running brings it out in me.  That's a little backwards. 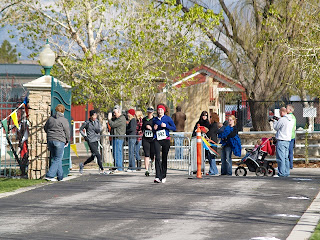