Recipe of the Week: Vanilla Vinaigrette

Who would have thought? I love this vinaigrette; it's my new fave.  I've been in to making my own salad dressings the last few weeks. It's way easy and it is usually healthier than bottled dressings.  The only bad thing is that I haven't made one yet that has lasted very long in the refrigerator. Some of them say you can use them for up to a week, but I don't know. It hasn't really worked for me.

I just try not to make more than I'm going to use the first time. It's easy enough to make that I can just make more next time I have a salad (this is because we don't have salads every day...or every other day...or every week.  I'm a bad salad maker, okay?).

Here's the recipe, and probably the best salad I've ever made.  In fact, I've made this salad 4 times in the last couple weeks.  Feta cheese is what makes it good if you ask me. If it were up to me, I'd probably just leave out the lettuce though.

Put all the ingredients in a mason jar (or an old spaghetti sauce jar because you don't have mason jars) and, shake, shake, shake!  That's the Pioneer Woman way.  Makes enough for a salad for 4 people. 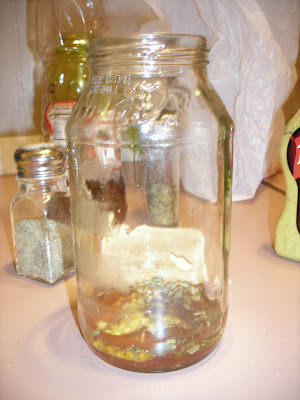 I made a salad with romaine lettuce, craisins, feta cheese, walnuts, and apples.  See the walnuts and apples? Okay, I forgot to put them in until after I took the picture. I also tried this salad with pears....delish, and I'm sure strawberries and acai berries would be excellent (but not blueberries, gross). 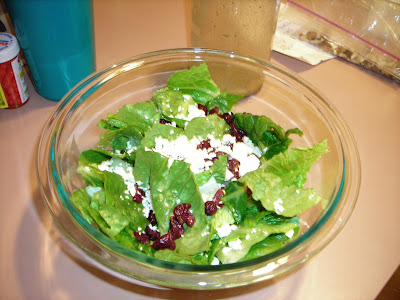 P.S. I met a lady at a Relief Society activity (what's Relief Society? Check this out and while you're there, look at this too) the other day who introduced herself as Sister Holmes and then said, "as in Sherlock Holmes."  I said, funny you should say that, because my last name is Watson.  I thought it was cool.... so, um, yeah.

Maybe you had to be there.