I like to search for blogs about cooking and baking so I can learn and find cool ideas to copy (because I've been thinking about it lately, and I can't think of many things I'm good enough at to just come up with creations on my own).  It happens ALL the time that I'll see a picture of an awesome cake, or a scrumptious meal and think, "hey, that looks pretty easy, I could do that no prob." In fact, usually the blog post says something like: "This cake is so easy, I promise. You don't need any kind of decorating experience to whip this up on your own."  And I'm thinking, YES!  I'm gonna try it.

Then I find myself in a tiny, hot, kitchen with counter tops covered in mixing bowls and a face covered in powdered sugar, trying my hardest to produce something that looks like what I saw in the picture on that lady's blog. I find out pretty quick that really, for the layman, this is not that easy at all.

90% of the time I get extremely frustrated during this process. Something always goes wrong and then I feel like I've ruined everything.  I stomp my foot on the ground, let out a humph! and say something like, "Why can't I just be good at this!" Translation: Why am I not already a professional cake decorator, I mean, I've made 3 cakes before this one so this should be easy! p.s. I really stomped my foot on the ground and let out a humph about this very thing just 2 days ago - in case you thought I was exaggerating that part.

This was my attempt. 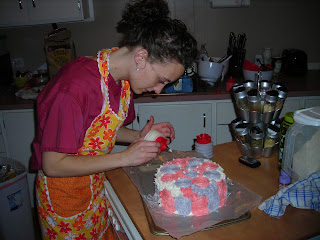 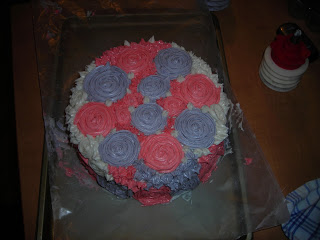 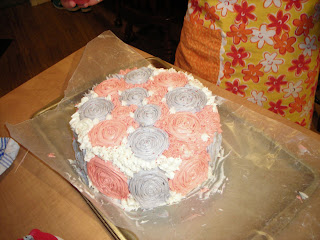 The cake was pretty easy, but it doesn't look as good as the cake I copied, for sure -- see? I encountered some problems frosting it because I'm not equipped with the right tools to make it easy. Things like, wax paper folding up and smushing my beautiful roses, happened. Or things like not being able to frost the bottom edges of the cake because the lip on my pan doesn't let me reach. I also discovered that you cannot make whipped cream from half and half (I was hoping it would work). It just quadruples in size and becomes foamy. BUT if you add some cool whip to it, it makes a delicious milk substitute in an Orange Julius. Mmmm. Instead of a vanilla mousse in the middle, I just pureed some strawberries and folded them into my store bought cool whip (because my half and half didn't become whipped cream and it was Sunday so I couldn't go to the store).  It turned out deliciously. 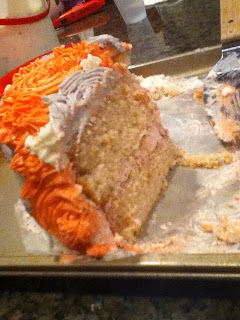 In the end, I learned from this particular cake that the little things really don't matter. It's just a cake, after all, and will be cut up, spooned out and turn into a delicious mush inside little and big mouths and tummys. Most little mistakes are easily cover-up-able, and people will be impressed by its general splendor and won't even notice a smushed rose or two on the back. 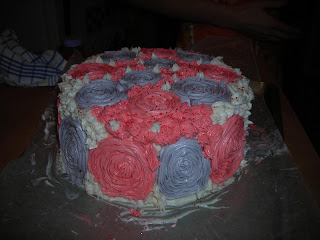 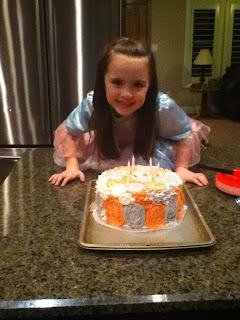 I also learned that for a 6 year old girl, this kind of cake is a dream come true. My sweet niece Taya, without any prompting, thanked me 3 times throughout the night and each thank you was more heartfelt and genuine than you'd expect from an adult, let alone a not-quite-6-year-old.

It made the experience way worth the effort. Love you Taya!
Posted by Abby Watson at 1:01 PM